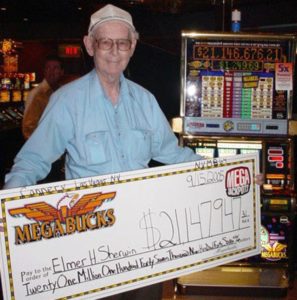 According to one estimate, based on the number of stops and the number of stops corresponding to a jackpot symbol on each reel, the probability of winning the ‘Megabucks’ progressive jackpot is 1 in 49.8 million spins. Nevertheless, the late Elmer Sherwin, who died in 2007 at the age of 93, defied astronomical odds – in the order of trillions to one – to win the jackpot not once, but twice, at two different Las Vegas casinos, sixteen years apart.

Sherwin was already a 76-year-old retiree when, on November 22, 1989, he lined up the Megabucks symbols for the first time at The Mirage on the Las Vegas Strip, which had only opened to the public earlier that day, and collected $4.65 million for his $3 stake. According to a spokesman for The Mirage, Sherwin played for about an hour-and-a-half and invested about $100 before winning what was, at the time, claimed to be the largest jackpot even won on a slot machine in Las Vegas.

Evidently not entirely satisfied with winning the progressive jackpot once, Sherwin continued to pursue what he later called his ‘life’s dream’ of a second Megabucks win for the next sixteen years. The stars, or at least the Megabucks symbols, aligned for a second time at the Cannery Casino in Downtown Las Vegas on September 16, 2005, and Sherwin collected a further $21.1 million. By now aged 92, Sherwin donated much of his winnings to charitable causes, including to the victims of Hurricane Katrina, which had caused catastrophic damage to cities along the Gulf Coast, including New Orleans, the previous month.