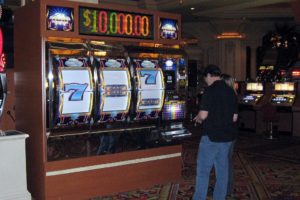 Named after a World War I German howitzer, the now-retired Big Bertha was, for many years, a fixture of Bally’s Casino on the Las Vegas Strip. Manufactured by Bally Manufacturing Co., at a reported cost of $150,000, Big Bertha was a novelty item, intended to dominate the casino floor and draw attention to slot machines. Measuring nearly eight feet tall and five feet wide, with three huge reels driven by a five horsepower electric motor and 20” chain wheels, Big Bertha certainly succeeded in that respect.

Despite the undoubted success of Big Bertha, the pioneering ‘super slot’ was superseded, in the Fifties, by an even bigger machine known, unsurprisingly, as Super Big Bertha. Similarly expensive to manufacture, Super Big Bertha measured over eight tall and six-and-a-half feet wide and featured eight reels with twenty stops apiece.

Elsewhere on the Las Vegas Strip, at the Wynn Casino, the so-called ‘Microspin’ owes its name to the fact that it is based on the Microsoft Windows operating system, rather than anything to do with its size. Indeed, Microspin stands nine feet high and for a period, in the late Nineties, had the distinction of being the tallest slot machine in the world.

Still in Las Vegas, but away from the Strip, in Downtown, Four Queens Casino was home to a gargantuan slot machine known, unsurprisingly, as the ‘Queen’s Machine’. The Queen’s Machine measures ten feet tall and nine feet wide and, in its heyday, had the distinction of being the largest slot machine in the world. It was large enough, in fact, to accommodate six, seated players, who wagered on each spin via individual betting stations.

Several hundred miles northwest of the Las Vegas Strip, in Lake Tahoe, the now-defunct Barney’s Casino was, in its time, home to another celebrated, mechanical monster, which went by the name of ‘Big Irish Luck’. As the name suggests, Big Irish Luck featured four-clover and shamrock symbols, among others, on its five gigantic, Irish-themed reels.