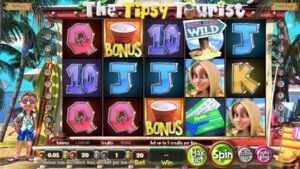 With its 5×3 reel grid, 20 paylines and high volatility, the Tipsy Tourist video slot by Betsoft brings the holiday theme to life with its symbols, animated graphics and background music.

Among other things, our happy traveller sheds his corporate suit in the hopes to find plenty of sun, sea, and sand, as well as plenty of alcoholic drinks and perhaps the company of a beautiful woman. Symbols like these appear repeatedly on the reels, along with a ball symbol for free spins, a beach sign that acts as a wild symbol and a fun bonus game where players must drink their way to the riches.

Tipsy Tourist is an exciting video slot with accessibility on mobiles, tablets and computers. Bets start at only 0.02 coins per spin and a max bet of 100.

Poker seems to be a favourite pastime of this Tipsy Tourist and you can earn up to 375 bonus coins if you land matching poker symbols on the reels. You can also receive up to 750 coins if you land a plane ticket or shell symbol. Up to 1,750 coins can be won with a beach babe symbol.

You’ll win eight free spins with three, four, and five beach ball symbols appearing across the reels of the screen. There is also a ‘clingy wild’ feature that retriggers the feature when wild signs appear on the reels, which in turn, makes winnings that much more lucrative.

Red cup icons appear on the first, second, and third reels to trigger the drinking game bonus. The game asks players to guess if a coin will land on tails or heads, resulting in the character downing a shot. You’ll then win a prize if you can guess correctly before the first person drinks a total of three shots.